Sweet Tooth? Here is a deliciously terrifying music video from German/Italian director Miro Mastropasqua. The combination of the eyebrows and black teeth definitely push it over the edge…props to makeup artist! 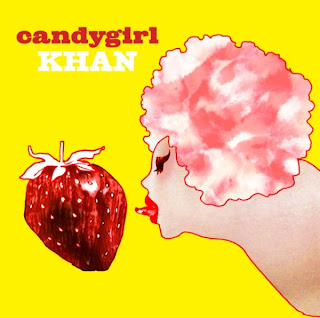 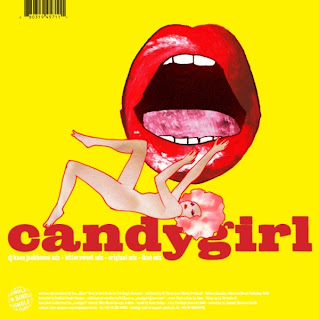 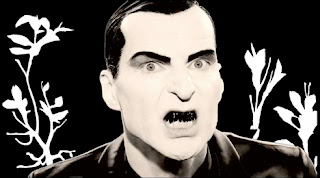 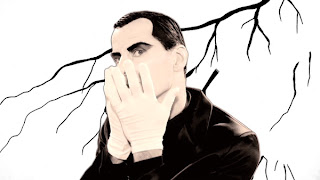 The label about this release
After the great success of IMS007 "Fine Mouche Remixes" a brand new single by the disco troubadour KHAN himself. CANDYGIRL is Adam and Eve, Joseph Fritzl and Angela Merkel. She is German Schlager-kitsch but epic deep-disco-house. Zeki Muren meets David Hockney. CANDYGIRL is the first single of the forthcoming KHAN album due later in 2010 produced by Zero Cash & KHAN for I'm Single Records. DJ KAOS delivers a straight pumping Chicago jacking-house mix and Japanese IKUO digs deep into his 80s neon-frosting cookie box. Both sweet and driving. This spinning lollypop is accompanied by the visual work of two Italian artists, Miro Mastropasqua and Onze in form of this cover art and the Candygirl video to be released simultaneously on I'm Single Records. Record Release Party on Valentines day (Feb. 13th 2010) at Picknick/Berlin for all self-made singles and those who love the bittersweet life.
Biography
Raised in Frankfurt, Germany to Turkish-Finnish parents, Khan is an extremely prolific producer. Describing him as a restless vagabond is not really quite enough. He's a world resident (currently based in Berlin, after previously residing in New York, Mexico, Cologne and Finland) who has produced electronic music under at least 10 pseudonyms and collaborations, including 4E (named after his New York apartment number, where he used to live with Jimi Tenor), Bizz OD, El Turco Loco, or Captain Comatose.
Resident Advisor review: Single Khan "Candygirl"
You rarely get a chance to review electronic music that makes more sense in reference to post-punk and the German schlager tradition than soul and disco. "Candy Girl," the eighth outing from Berlin-based Khan and Vinny Villbass' I'm Single label, though, is just that type of single. A finely crafted pop track inspired by Khan's time in New York during the '90s when he was recording with names such as Kid Kongo, its arrangement brings together dry funk basslines, warm analog synths and hazy vocal harmonies. The raw sound of New York bands like Liquid Liquid and Inner Life, the very fundament on which LCD Soundsystem and their companions built a scene, are prominent.
While "Candy Girl" is nicely produced and an enjoyable ride, the vocal track is where opinions may diverge. Khan's lyrical flamboyance comes through with cliché and overused lines like "you're my lollipop/ I wanna cream on top." It's the type of easy sexual references that barely belongs in an Aqua tune, let alone something you'd expect to find in modern avant-garde pop music. Yet it's the simple lyrics — in contrast with the sparse and raw production — that makes "Candy Girl" such an intriguing proposition.
The dance floor-friendly remix comes from another Berliner with strong New York ties. DFA's DJ Kaos gives the "Candy Girl" an old school house makeover, utilizing a typical jack formula of basslines and drum machines laid over with snippets of Khan's vocals.

An original Structure label-group artist with dozens of releases on Köln-based imprints such as DJ Ungle Fever, XXC3, Eat Raw, and Pharma, NYC-based experimental electro producer Can Oral is the man behind an array of pseudonyms. Recording most often as 4E and Khan, Oral's discography is also littered with such monikers as Bizz O.D., Gizz T.V., El Turco Loco, and Fuzz DJ. One of only a handful of European producers to move to the U.S. in order to jumpstart the dozing underground, Oral includes NY's Temple Records (the store he opened under Manhattan's Liquid Sky Clothing), as well as record labels Temple and Liquid Sky among his ongoing commitments. The brother of Air Liquide's Cem Oral, Can was (along with artists such as Mike Ink, J. Burger, and Biochip C's Martin Damm) an active contributor to early Structure labels such as Blue and DJ Ungle Fever, the center of the German acid/techno explosion during the '90s heyday of experimental acid and techno. Can began recording as 4E after moving to New York (the name was the address of his first flat, which doubled as his studio), and has since released a number of EPs and full-lengths as both 4E and Khan, most notably on Force Inc./Mille Plateaux and his own fast-expanding Liquid Sky, Home Entertainment, and Temple labels. Stylistically, Oral treads closest to experimental hip-hop and electro, fusing gritty 303 chirps and smooth electronic atmospheres with kicking, mid-tempo breaks constructed from familiar drum sounds and patterns. His 1996 debut for Liquid Sky sister label Home Entertainment, Blue Note, is ambient electro in the vein of B12, Jonah Sharp, and Autechre/Gescom, with none of the more caustic resonances that defined his earlier, more dancefloor-friendly work in evidence. Oral also operated and played at the weekly club, Killer, and worked on material with noted experimental/ambient composer Tetsu Inoue. Released in 1997, Silent Movie, Silver Screen was his first album for noted New York label Caipirinha. Two years later though, he signed a contract with the indie-rock imprint Matador and released 1-900-Get-Khan. Passport followed in early 2000, and No Comprendo was issued the next spring on Matador. [See Also: 4E]